Conscious that this has become a little hard to find online, I thought it'd be worth posting a link to my PhD thesis, Production of Aluminium Foam using Calcium Carbonate as a Foaming Agent, from the Cambridge years, online.  Because research is frankly no use unless people can access and build on it, and there's a fair bit in here about aluminium foams that's still interesting and relevant.

This was the first time that anyone had spent any real time looking into calcium carbonate as a way of making foams, and to cut a long story short it turned out to be a very cheap and cost effective way of doing it - because the gas produced was (oxidising) carbon dioxide rather than the more widely used (reducing) hydrogen gas, it made a thin layer of alumina on the aluminium cell walls and in doing so hugely stabilised the molten foam.  This transformed what had previously been a pretty unstable production process, and meant that foams could be made on a far more industrial basis, with smaller cells.

The document is a whisker under 200 pages, and if you're printing it you'll be better off doing it in colour, for the (many) diagrams to make sense.  Do feel free to cite it - the British Library citation reference is linked here.  I'm still always happy to answer questions on it, though I don't work in this field any more so my memory's frankly pretty rusty on the subject! 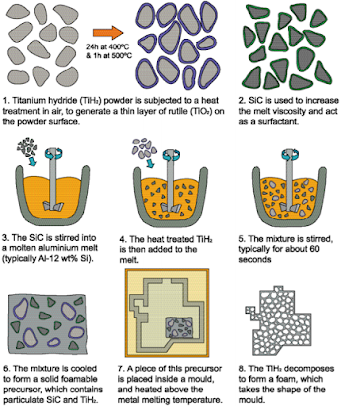 Punting guide to the River Cam

A very old guide to punting from Cambridge to Grantchester - picking out some of the highlights.  Not especially useful but it seemed a shame to lose it.   The Punt Pool All punt trips using St John's college punts start (and hopefully end) here. Note the swan nest on the island in the spring (sometimes populated with rare black swans, imported from New Zealand and only usually seen in St James' park in London). The Bin Brook A little-known tributary of the River Cam; it is shallow and muddy.  It has been known for Johnians and lost tourists to punt down here. That said, it isn't exactly one of the highlights of Cambridge.   Downstream You can't go much further than Jesus Green without permission to use the lock, as the river below is infested with boaties and houseboats.  It is puntable (albeit quite deep) and a bit of an adventure.  The Wren Bridge There's an engraving of third court, with the bridge in it, on one of the piers facing the bridge of sighs.
Full post »